Today’s guest post comes from Titus Chalk who has written a history of Magic: The Gathering called Generation Decks

I’ve spent plenty of time playing this game but, unlike many of my friends, never got caught up in the collecting aspect of it. I saw some people spend thousands of pounds on collecting cards and in our little circle of gamers we called it Crack: The Gathering. Because some people seemed to become addicted…

Titus Chalk is a freelance writer currently based in Berlin. His itinerant life has led him from the UK to New Zealand and France and now, to the German capital. Having learned to play Magic: The Gathering in early-nineties New Zealand, he has been lugging a cupboard full of cards with him ever since, with many of the rarest in his collection worth more than their weight in gold. He loves Magic, has made friends for life playing it, but remains a critical and curious guide to the enthralling game. 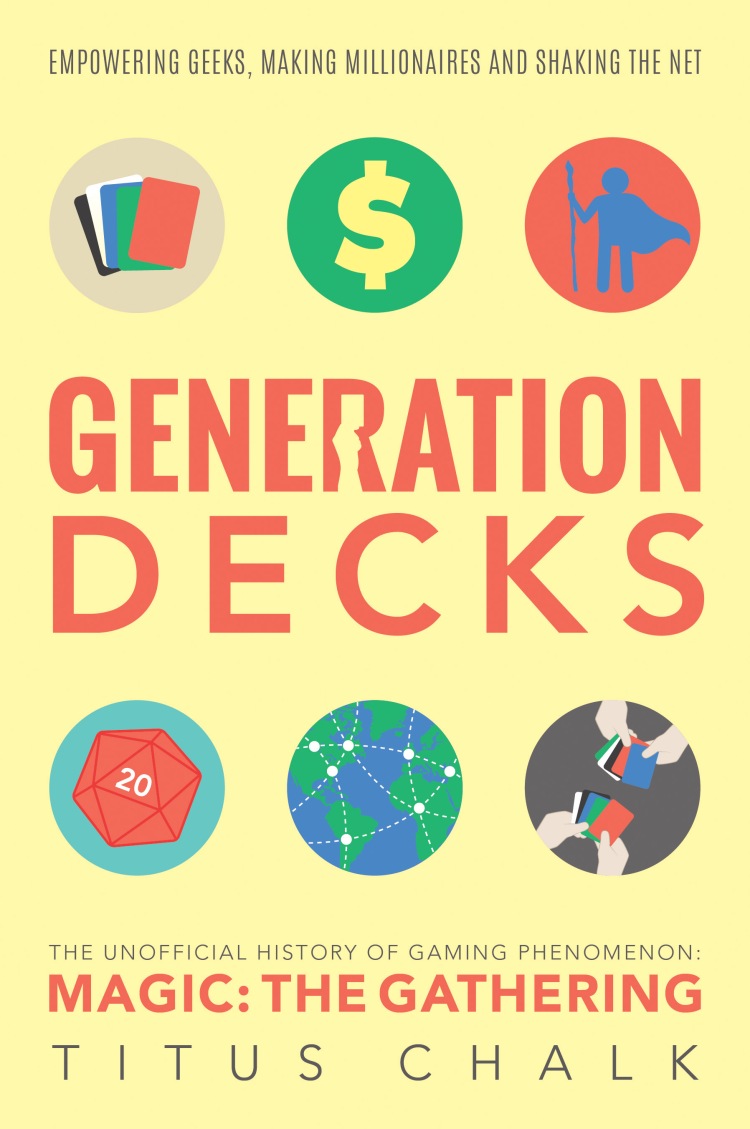 If there’s a thread running through my new book Generation Decks: The Unofficial History of Gaming Phenomenon Magic: The Gathering, it’s the value of community. While it recounts first and foremost the development of an iconic game, it’s also the story of the players who flocked to it – including myself – desperately searching for something bigger to belong to. I admit, I feel like I have had problems fitting in for much of my life. But if there’s one place that taught me the value of community, it’s Bristol.

I lived in Bristol as a student from 2001 to 2005, a time I look back on with great fondness. Sure, I got off to a rough start, trapped up in student halls surrounded by braying London kids who had invaded Bristol in an armada of Volkswagen Golfs. But once I had made a few like-minded friends – friends who emboldened me to explore the city beyond Clifton – I was hooked. Bristol was home to joyous highs and numbing comedowns – and the creative scene hummed with ideas born from both.

With drum n bass yielding diminishing returns and trip-hop a dirty word, it felt like the city was grasping for something new. DIY record labels like Clean Cut and Float fed into that, putting out cerebral electronica and staging ramshackle live nights that capitalised on a moment before laptops became ubiquitous. For more physical needs there were the likes of Emergency, Kingpin, Toxic Dancehall and any number of sprawling free parties that lasted till dawn beneath railway tracks.

What made it a community though? Well, in part the city’s small size – the high likelihood you would bump into someone from a dancefloor on the street and share more than a gurning high-five. The physical infrastructure was there to support the scene, too, from basements on Stokes Croft Road to record shops on Park Street (halcyon days). And then there was an internet forum for devoted party-goers, Hijack, which helped us all coalesce before social media became a thing. While I wasn’t making music myself, I felt genuinely involved, appreciated even, just for bringing to each party a determination to contribute to the atmosphere rather than to simply consume it. It was a heady time, a nourishing time.

When I left for a journalism job in London, I lost all that. Still, I set great store in getting on. In learning a craft. In earning money in some kind of recognisable career – rather than drifting in an aimless job in Bristol that paid for partying and not much else. Though it was a wrench to leave friends, I felt like Bristol might stifle me if I stayed – that my drive to do anything might be tamed by the mild, mild West.

Looking back, aged 36, a freelancer in faraway Berlin, part of me is sure I made the right decision. That at some point, you have to break away from your student life and seek out quite what it is that you want to do. But having moved on from a full-time job to seek out something more creatively rewarding, to be taking my first tentative steps away from journalism, to be delving deeper into the art of writing fiction… I can see more clearly than ever the value of the community I left behind in Bristol. The gaming community I discovered during my time playing Magic: The Gathering empowered me to write a book about it. But that realisation has only made me pine more for an environment that can help me progress my writing in the same way.

So, sometimes when I should be editing a troublesome passage, I wonder to what extent Bristol offers that in 2017. Friends who have stayed have prospered in their own ways – and I’m sure have had their self-belief bolstered by the people around them. Perhaps then the city’s solidarity is still intact – despite a pincer attack from gentrification and austerity. Perhaps writers, artists, musicians, street artists and skateboarders are still prospering, propped up by their peers in the best possible way, the close-knit community I discovered there still thriving. Because there was always something in the Bristol air – beyond the tang of a million joints blazing in the sun. Call it hope. That we could achieve more together than we could alone.

Thanks to Titus for the nostalgic trip back! I left Bristol when I graduated and returned a few years later to never leave again. Bristol regularly gets a “best city” write up and does feel special. The creative scene is amazingly diverse and supportive and I’ve been told by incomers that it beats other cities hands down. I would say though that it is a grassroots city and a collection of communities (albeit ones that sometimes overlap).

I look forward to reading Titus’s book and recommend you to go and check it out.

Pete W Sutton is a writer and editor. His two short story collections – A Tiding of Magpies and The Museum for Forgetting – were shortlisted for Best Collection in the British Fantasy Awards in 2017 & 2022 respectively. His novel – Seven Deadly Swords – was published by Grimbold Books. He has edited several short story anthologies and is the editor for the British Fantasy Society Horizons fiction magazine. View more posts